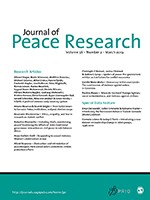 Published in Journal of Peace Research, online 14 May 2019.

The Historical Varieties of Democracy dataset (Historical V-Dem) contains about 260 indicators, both factual and evaluative, describing various aspects of political regimes and state institutions. The dataset covers 91 polities globally – including most large, sovereign states, as well as some semi-sovereign entities and large colonies – from 1789 to 1920 for many cases. The majority of the indicators come from the Varieties of Democracy dataset, which covers 1900 to the present – together these two datasets cover the bulk of ‘modern history’. Historical V-Dem also includes several new indicators, covering features that are pertinent for 19th-century polities. We describe the data, coding process, and different strategies employed in Historical V-Dem to cope with issues of reliability and validity and ensure intertemporal and cross-country comparability. To illustrate the potential uses of the dataset we describe patterns of democratization in the ‘long 19th century’. Finally, we investigate how interstate war relates to subsequent democratization.

Full text for subscribers at sagejournals