The Politics of Oil 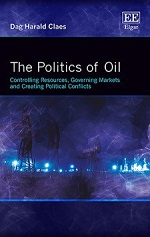 The Politics of Oil brings together legal studies, economics, and political science to illustrate how governments gain and exercise control over oil resources and how political actors influence the global oil market, both individually and in cooperation with each other. The author also investigates the role of oil in preserving regime stability, in civil wars and in inter-state conflicts, as well as discussing the possible implications for the oil industry from policies to combat climate change.

Exploring the wide variety of political aspects relating to oil resources and markets, The Politics of Oil provides an important and accessible introduction to topics such as the so-called ‘resource curse’, oil rent, producer cartels, and international oil governance. Broadening the scope further, Dag Harald Claes also examines the role of oil in political conflicts.

Divided thematically into three parts, this book discusses the exercise of political control over oil resources, their extraction, and the income from oil exports; the vagaries of oil market forces and political attempts to govern them; and finally, the complex role of oil in international, regional, and domestic conflicts. Drawing on a number of academic perspectives, including economics, political science, philosophy, history, geology, and more, the key debates surrounding oil are explored. These include the role of OPEC, the future of oil in the context of climate change, and the part oil has played in civil war and terrorism.

Easily accessible, this introduction to the intertwined relationship between oil and political decisions and behaviour, is an essential tool for students of political science, economics, and energy related studies of all kinds. It is also valuable for policy makers, industry practitioners, and others interested in the oil business or governance seeking a comprehensive introduction to the subject.

The Politics of Oil