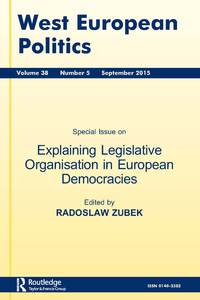 Cameral procedures define the modus operandi of a parliament. This article examines how the electoral environment affects parliaments’ rules of procedures and legislators’ rights. It argues that when the electoral environment motivates legislators to act individualistically governments are incentivised to restrict cameral procedures to curtail legislators’ behaviour. Materialising such incentives depends on the government’s ability to pass restrictive procedural changes. To test the assertion, four decades (1967–2007) of amendments to the Israeli Knesset’s rules of procedure were examined and support provided for co-variation of the electoral environment and restrictive Knesset’s procedures. The analysis then details the factors that enabled Israeli governments to pass such restrictive measures. Indeed, governments seem to use the rules of procedure strategically in their attempt to improve their control and curtail legislators’ behaviour.