Why Electoral Systems Don't Always Matter: The Impact of "Mega-seats" on Legislative Behavior in Ireland

A significant and influential body of research suggests that electoral systems influence legislators’ behavior. Yet, empirical research frequently fails to uncover the existence of such a relationship. This study offers a potential solution: The core suggestion is that the mechanisms by which prized post-election positions (mega-seats) are distributed within a legislature impacts legislative behavior. When party leaders cartelize the allocation of mega-seats, the anticipated effects of the electoral system on legislators’ behavior may dissolve. Ireland’s candidate-centered electoral system and party-controlled mega-seat allocation provides for a hard empirical test of the argument. 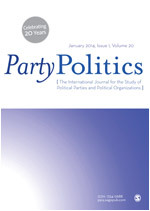 New data on mega-seats and voting behaviour in the Irish parliament between 1980 and 2010 supports the notion that mega-seat considerations trump the impact of the electoral system on roll-call behaviour. The implication is that what goes on within the legislature may be more important for influencing legislators’ behaviour than what goes on at the ballot box.

By Shane Martin
E-mail this page