Workshop 2 at the conference Challenges to Democracy, 5-6 November 2015, University of Oslo. 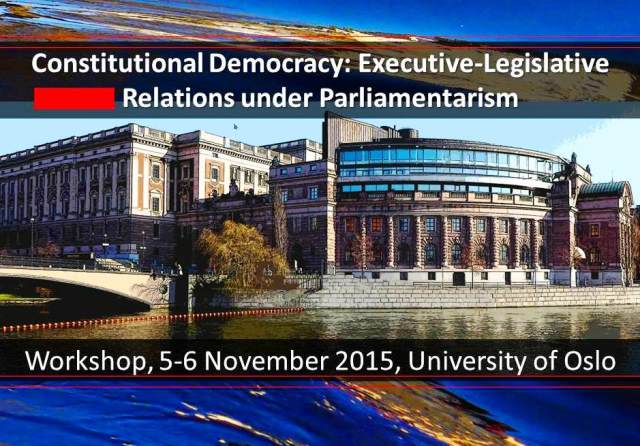 The vast majority of today’s democracies have adopted one version or another of parliamentarism as their system of government. With the exception of United States and Switzerland the oldest democracies in the world are parliamentary. Also, parliamentarism are more common among recent constitutions than presidentialism (which is the main alternative). Even if the earliest instances of parliamentary government evolved gradually in the nineteenth century, typically through political adjustments within the pre-established constitutional framework and without formal recognition, parliamentarism today tends to be a regime type that as much as presidentialism is the product of conscious constitutional design. Yet, beyond the basic principle that defines them (i.e. that the government somehow emerges from, and remains responsible to, the national parliament), parliamentary systems vary considerably in the way they are organized and function. The purpose of this workshop is to focus on the background, causes and consequences of this variation in executive-legislative relations under parliamentarism, including its semi-presidential variants and with the possibility of studying the role of the judiciary (or other “external” bodies”) as guardians of the basic executive-legislative rules and mechanisms as well.

The workshop is organized by Eivind Smith and Bjørn Erik Rasch, and funded by the Research Program on Democracy at University of Oslo.

Paper proposals should be sent to Smith and Rasch at your earliest convenience and no later than 20 September 2015. There will be 3 sessions of two hours each, meaning that we will accept 6-9 papers for presentation. There will also be two plenary sessions at the conference. The Research Program on Democracy will cover hotel for 2-3 nights. Unless otherwise agreed, participants are expected to take care of their own travel expenses.

Bjørn Høyland (Oslo) [The End of Contestation? Legislative Voting in the Norwegian Parliament 1905-1940; with Søyland]

Iris Nguyen-Duy (Oslo) [Back to Basics: The Origins of Parliamentary Sovereignty in Norway]

Martin Søyland (Oslo) [Survival of the Ministers: On Ministerial Durability in Norway]