The “negative” archetype of parliamentarism, where the government remains in power as long as the majority chooses not to remove it, is today based on the experience of only a few countries (for example, the Scandinavian countries), where the principle of assembly confidence took roots over a relatively long period of time and under restricted political competition. 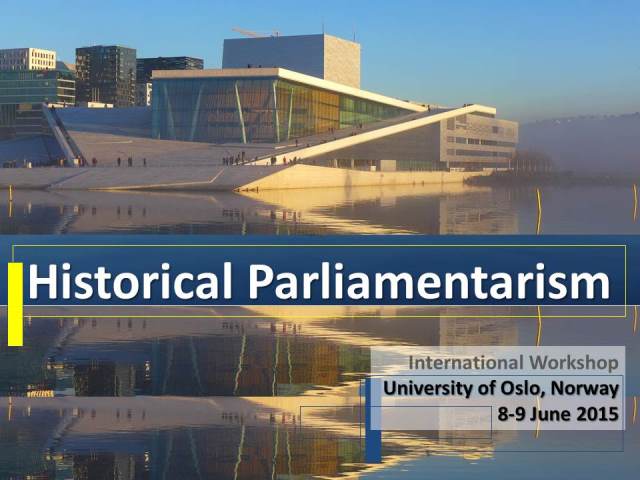 In this workshop, we aim to bring together researchers from the social sciences, humanities and constitutional law to discuss the ways in which parliamentary institutions have emerged in different settings. How, when and why did various countries get parliamentary practices or parliamentary constitutions?

The workshop is open with regard to theoretical and methodological approaches, as well as geographical coverage. Paper proposals that approach single case-studies or a small number of cases from a historical perspective are particularly welcome.

Paper proposals, including a brief abstract, should be sent to the organizers. The deadline for proposals is 15 March 2015.There will be no registration fees. Lunches and a workshop dinner will be provided. Unless otherwise agreed, participants are expected to take care of their own travel and accommodation expenses.

Deadline for circulation of papers: Monday, 25 May

The workshop is funded by The Inter-faculty Research Program on Democracy; Department of Political Science; and the project The Evolution of Parliamentarism and Its Political Consequences (The Norwegian Research Council). Contact: Professor Bjørn Erik Rasch, University of Oslo.