ECPR Workshop on The Evolution of Parliamentarism and Its Political Consequences

The number of democracies in the world today is higher than in any other time. The majority of these democracies adopt a parliamentary constitution, that is, one that is based on assembly confidence. Assembly confidence regimes are those in which governments, in order to come to and stay in power, must be at least tolerated by a legislative majority. They can be divided into positive and negative parliamentarism. The aim of the workshop is to examine the origins and consequences of the mechanisms of positive and negative parliamentarism. 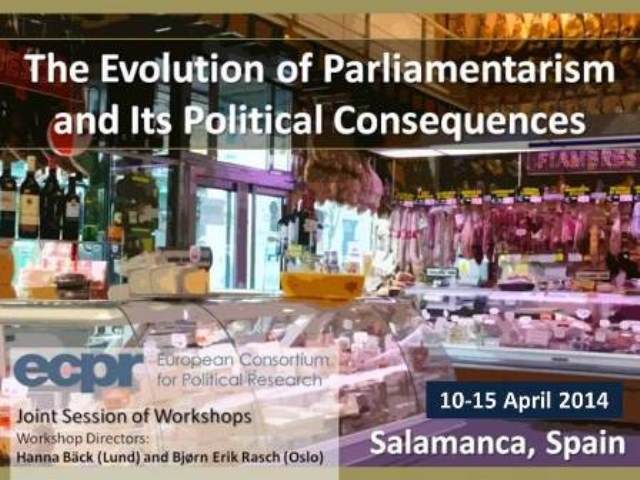 In positive parliamentarism, a majority is required to explicitly express its support for the government; in negative parliamentarism such an explicit expression of majority support is not required. Positive parliamentarism is characterized by a variety of instruments, related to both the making and breaking of governments and their governing capacity (investiture rules, confidence vote, package vote, exclusive government initiative, etc.). We believe the distinction between the two regimes is crucial for understanding the way they operate. Yet, what we know about them is surprisingly sparse and rudimentary. Given that most democracies in the world have adopted some form of parliamentary institutions, understanding the consequences of variation in parliamentarism is both theoretically and practically important.

Deadline for distribution of papers: Monday 31 March.  We have 45 minutes for each paper. Presentations by the author should be brief, and take no more than 15 minutes. Discussants may use up to 10 minutes, leaving at least 20 minutes for general discussion.

Hazan, Reuven Y. The Evolution of the Constructive Vote of No-Confidence and Its Political Consequences.

Shomer, Yael. Executive-Legislative Relations and the Relative Power of the Legislature and Government: Four Decades of Israeli Cameral Procedure Change.

Manow, Philip & Valentin Schröder. Is Negative Parliamentarism sometimes no Parliamentarism after all? Evidence on Tiered Systems of Power Separation from the Weimar Republic, 1920-1932.

Mölder, Martin. Coherence of Coalition Governments Across Types of Parliamentarism.

Weipert-Fenner, Irene. The emergence of parliamentarism in Egypt, 1866-1882.

Heller, William B. Who's in Charge? The Party Leader, Legislative Institutions, and Party Preferences.

Cheibub, Jose Antonio, Shane Martin & Bjørn Erik Rasch. To Invest or Not to Invest? Modes of Government Selection in Parliamentary Democracies and their Origins.