This workshop examines how parliaments organize to maximize governmental efficiency as well as their ability to keep coalition governments together. What are the internal and external institutional determinants that shape legislative coalition management and help increase the coalition's legislative capacity? Does this institutional structure vary across countries? 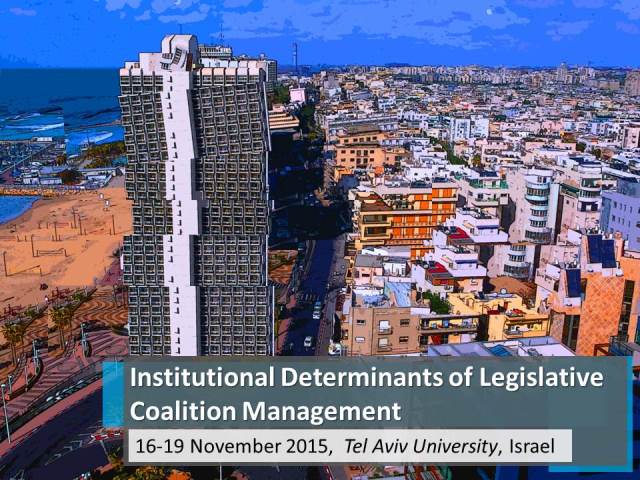 These questions and more will be examined by workshop participants. Participants include researchers mainly from the United States and Europe who will present studies on a range of related topics including: the internal organization of parliament, parliamentarism and coalition management, the coalition's ability to shape the legislative agenda and much more.

Stefanie Bailer (University of Basel) and Clint Claessen (ETH Zürich) "What happens after? An analysis of post-parliamentary private sector career positions in Germany and the Netherlands"

Cristina Bucur (University of Oslo) and Jose Antonio Cheibub (University of Illinois), "Presidents and the Choice of Prime Ministers in Parliamentary Democracies"

Shane Martin (University of Leicester), "Bargaining in Legislatures, Portfolio Allocation and the Electoral Costs of Governing"

Martin Søyland (University of Oslo), "Survival of the ministers: On ministerial durability in post-war Norway"

Orit Kedar, Liran Harsgor, and Or Tuttnauer (Hebrew University of Jerusalem), "Party-System Fragmentation: A New Look at an Old Question"

Paper proposals, including a brief abstract, should be sent to the organizers. The deadline for proposals is 15 March 2015. New participants are added to the list above as soon as their paper proposal is accepted. There are no registration fees. Lunches and a workshop dinner will be provided. Also an excursion to Jerusalem is being planned. Unless otherwise agreed, participants will have to cover their own travel costs and accommodation.

All papers will be uploaded to this website. Participants are required to send their papers to the organizers and/or Cristina Bucur no later than Wednesday, 4 November, 2015.

The workshop is part of the project The Evolution of Parliamentarism and Its Political Consequences, funded by The Norwegian Research Council. Contact: Professor Bjørn Erik Rasch, University of Oslo.