The aim of this conference is to promote a comparative, interdisciplinary dialogue on methodological and substantive issues in the study of constituent assemblies between scholars from different parts of the world, featuring historians, political theorists, legal scholars, sociologists and politicians working on constitution-making in Europe, Asia, South America, Africa and North America. 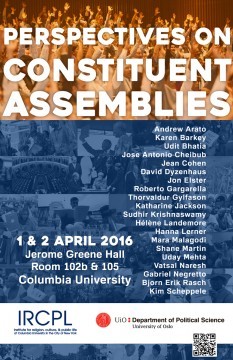 Our goal is to begin a conversation about constitution-making that is conscious of the breadth of Western and non-Western experiences, and also self-reflexively critical of such distinctions.The conference shall revolve around themes such as the distinctiveness of constituent assemblies, their reliance on previous constitutions/other legal instruments, constitutional compromises and the accommodation of cultural diversity. From a methodological perspective, it shall engage with questions such as how we ought to read constituent assembly debates against the backdrop of debates over ideal and non-ideal theory. On the other hand, it shall also address substantive issues such as ways in which national assemblies have engaged with religious and ethnic difference and how the resulting arguments on rights have influenced the international human rights regime(s).

Our tentative program is now available here.  It will be updated as the schedule is finalized.

This conference is sponsored by the Institute for Religion, Culture, and Public Life and the Department of Political Science at the University of Oslo. Organized by Karen Barkey, Jon Elster and Bjørn Erik Rasch.