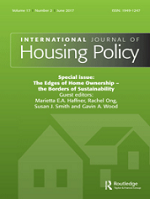 This paper examines how ethnic segregation is connected to an ethnic division of the housing market and a spatial separation of different housing tenures in four Nordic cities. Explanations for the differences across the cities are found by comparing housing markets and housing policies. The housing markets are in all four cities ethnically segmented with high concentrations of immigrants in some forms of tenures (especially social/public housing) and low concentrations in others. We further discuss the reasons for the observed pattern. The paper shows that the spatial distribution of immigrants is strongly connected with the tenure composition of neighbourhoods. Ethnic divisions of housing tenures thus contributes to segregation, but the effect is much dependent on how tenures are distributed spatially. It is shown that ethnic segregation in three of the cities is connected to social housing, while cooperative housing is crucial in the fourth. It is also shown that a policy of neighbourhood tenure mix in one of the cities has resulted in a relatively low degree of segregation in spite of high concentrations of immigrants in social/public housing.