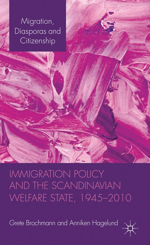 This book explores the historical development of post-war immigration politics in Norway, Sweden and Denmark from the perspective of the welfare state, examining how these welfare states with generous and inclusive welfare schemes and a strong sense of egalitarianism cope with the pressures of immigration and growing diversities. Through unique case studies and comparative historical analysis, the authors reveal significant differences between the strategies employed by the three countries to confront the challenge of immigration: Sweden as liberal, Denmark as restrictive and Norway somewhere in between, concluding that current patterns of divergence are consistent with earlier, more subtle variations.

GRETE BROCHMANN Professor of Sociology at the University of Oslo and at the Institute for Social Research in Oslo, Norway. She has published several books and articles on international migration, sending and receiving country perspectives, EU policies, welfare state dilemmas as well as historical studies on immigration.

ANNIKEN HAGELUND Senior Research Fellow at the Institute for Social Research in Oslo, Norway. Her research interests include immigration and welfare policy as well as the local implementation of these policies. Recent publications include articles in Journal of European Social Policy, International Migration and Citizenship Studies.