The Nordic Varieties of Capitalism 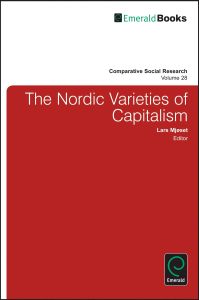 This is the only comprehensive and up-to-date analysis of the political economy of the five Nordic countries (Denmark, Finland, Iceland, Norway, and Sweden). Five studies have been written within a project, and are based on thorough discussions on a common framework within which the distinct features of the economic policies of each separate country are analysed in a comparative perspective. The studies are accompanied by an extensive comparative discussion - written collectively by the members of the project team - that locates the Nordic model(s) within the wider map of capitalist varieties in the contemporary Western world. This book emphasizes the variety of experiences within the Nordic realm, from the dramatic collapse of Iceland's economy as the financial bubble burst in 2008 to the full-employment oil-economy of Norway that proved virtually unaffected by the financial instabilities of 2008. It also identifies certain common transformations (particularly linked to the politics of immigration and integration, the persistent role of the unions, and new opportunities created by national systems of innovation).