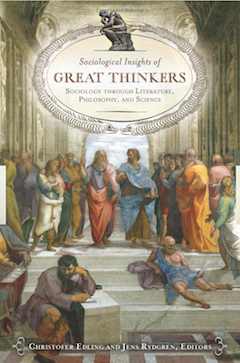 In this book, leading sociologists expand the scope of their discipline by revealing the sociological aspects of the works of great philosophers, scientists, and writers.

Sociology is customarily defined as the study of society and human social interaction. Some of its ideas come from formal research, undertaken by degreed practitioners. Yet the musings that underlie the discipline are the very same subjects that inspire the novelist, the philosopher, and even the scientist. What can the works of such individuals add to the sociological canon?

Sociologists have long recognized that sociological insight can be gleaned from creative thinkers outside their formal discipline. Sociological Insights of Great Thinkers: Sociology through Literature, Philosophy, and Science captures and examines those insights in 32 essays that discuss scholars and writers not normally associated with any sociological school of thought.

Following a tradition of enriching the sociological toolkit by finding influence in philosophy and literature, the volume's contributors—an international group of renowned scholars—eschew biography to focus solely on sociological interpretations that can be drawn from the work of many of history's preeminent thinkers. Among the book's subjects are philosophers such as Aristotle, Plato, Kant, and Cassirer; scientists such as Darwin and Galileo; and authors such as Kafka, Proust, and Shakespeare. The essays not only allow readers to see such thinkers in a new light, but underscore the fact that sociological questions have lain at the very heart of humanity throughout history.

Features
• 32 short essays discuss sociological insights of scholars and writers who are not normally associated with any sociological school of thought
• The organization of the work allows the reader to explore the broader ideas of sociology while moving towards insightful and current sociological debates
• Contributors are leading sociologists from Europe and the United States, representing all streams of the discipline

Highlights
• Offers an innovative look at, and a new take on, renowned intellectuals by focusing on sociological aspects of their writings and downplaying biographical facts
• Allows readers to rediscover some of the greatest minds of Western culture in a sociological context, relating their thoughts to the study of the individual life and the history of society
• Covers an impressive range of philosophers, authors, and scientists, whose works are usually not discussed in sociology
• Makes sociological thinking accessible to the nonsociologist