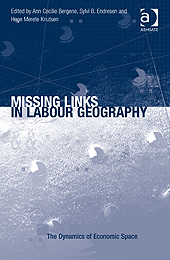 The book is published by Ashgate, and is also available as an eBook.

Addressing a number of 'missing links' in the analysis of labour and its geographies, this volume examines how theoretical perspectives on both labour in general and the organizations of the labour movement in particular can be refined and redefined. Issues of agency, power and collective mobilizations are examined and illustrated via a wide range of case studies from the 'global north' and 'global south' in order to develop a better and fuller appreciation of labour market processes in developed and developing countries.

'The economy is global, and any understanding of labour and trade unionism today must be transnational: this was obvious even before 2008–9 and the crisis of world capitalism. But labour is not only a victim of neoliberal globalisation: organised workers have the capacity to fight back. This important new work represents a significant advance in the theory of global labour; perhaps more importantly, it offers essential insights for union representatives and activists worldwide.'
Richard Hyman, London School of Economics, UK