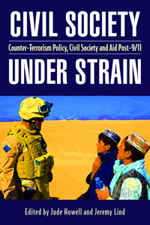 Following George W. Bush’s declaration of a global War on Terror in the wake of the September 11 attacks, political leaders around the world introduced a swath of counter-terrorist legislation and measures. Often hastily rushed in, not least to satisfy perceived public demand for a strong state response, such extraordinary laws and measures are riddled with ambiguity and trespass unashamedly on basic democratic rights. In many countries the introduction of such measures has fuelled a climate of fear and suspicion, damaging the efforts of civil society actors.

This edited volume investigates the convergence of aid and security objectives following the September 11 attacks. It explores the effects of this convergence on civil society spaces, actors and organizations and analyzes the impact of counter-terrorist legislation, measures, discourses and practices on civil societies in a range of political contexts. It proposes that the securitization of aid that was already underway in the 1990s has accelerated in the post-9/11 world. The bulk of the literature on civil society and development relates to the golden era of the 1990s. Civil Society under Strain brings the discussion into this newly altered landscape.