Victor Lund Shammas explores the pains of imprisonment in this article for the Wiley Online Library. 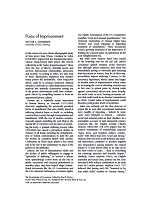 Imprisonment is widely seen as a humane improvement over corporal punishment. But social observers like Gresham M. Sykes pointed out that imprisonment entailed its own distinct set of deprivations, including the loss of liberty, goods and services, heterosexual relationships, autonomy, and security. According to the deprivation model, prison culture and inmate behavior are shaped by constraints encountered in the prison environment. Contrary to the deterrence hypothesis, which contends that greater pains of imprisonment yield lower offending rates, research suggests that harsher punishments may have criminogenic effects. Recent empirical work has emphasized secondary pains of imprisonment that extend beyond the individual offender to negatively impact families and communities outside the prison.