Additive or Multiplicative Disadvantage? The Scarring Effects of Unemployment of Ethnic Minorities 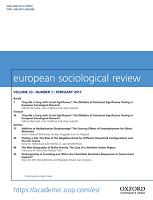 Previous research has documented that unemployed job applicants have problems re-entering the labour market, commonly referred to as scarring effects of unemployment. Studies have also documented ethnic discrimination in the labour market. Yet, we do not know how these categories jointly shape employers hiring decisions. Thus, we do not know if unemployed minorities face an additive or a multiplicative disadvantage in hiring processes. Building on experimental data from two waves of a randomized field experiment, we test whether we find an ethnic scarring effect, which would imply that contemporary long-term unemployment is particularly harmful to native-born ethnic minorities. As expected, our experiment documents scarring effects of contemporary long-term unemployment. We also found, as expected, systematically lower call-backs for applicants with Pakistani/Muslim names. Also, our results show that unemployed minorities face an additive disadvantage in the labour market. Thus, we find no evidence of an ethnic scarring effect of unemployment, which would imply different consequences of unemployment for minority and majority applicants.