Erik Vestin: The Decline of Class Voting in Sweden: Reconsiderations, Explanations and the Role of the New Middle Class

A recording of this event is available here.

Class voting has been one of the most wide-spread and persistent patterns of voting behavior in Western democracies throughout the 20th century. Understanding its decline is an important part of understanding the current political situation. This talk by Dr. Erik Vestin (Dalarna University) will present new results on the explanation of this decline. 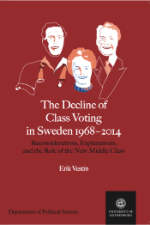 The presentation will deal with central issues in the study of class voting. One such issue is whether class voting is misleadingly seen to be in decline because of the class schemas used to measure it. In particular, it has been suggested the new class schema by Daniel Oesch, centered in a typology of work logics,  would be increasingly powerful in accounting for class voting. However, the development in class voting according to the Oesch schema is remarkably similar to the one we see in a traditional class schema. In addition, the causal effects of work logics claimed by Oesch and others do not turn up: Individuals that change occupation do not change their political attitudes in accordance with the theoretical expectations. This raises questions about whether the theory of work logics and their impact on political preferences correctly explain the patterns uncovered by the Öesch scheme.