In this session co-organized with C-REX - Centre for Research on Extremism Dr. Koen Damhuis (University of Utrecht) will present his mixed-methods work on radical Right supporters in France and Netherlands. 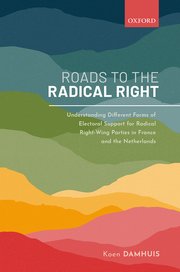 Trump, Wilders, Salvini, Le Pen - during the last decades, radical right-wing leaders and their parties have become important political forces in most western democracies. Their growing appeal raises an increasingly relevant question: who are the voters that support them and why do they do so? Numerous and variegated answers have been given to this question, inside as well as outside academia. Yet, curiously, despite their quantity and diversity, these existing explanations are often based on a similar assumption: that of homogeneous electorates. Consequently, the idea that different subgroups with different profiles and preferences might coexist within the constituencies of radical right-wing parties has thus far remained underdeveloped, both theoretically and empirically.

This ground-breaking book is the first one that systematically investigates the heterogeneity of radical right-wing voters. Theoretically, it introduces the concept of electoral equifinality to come to grips with this diversity. Empirically, it relies on innovative statistical analyses and no less than 125 life-history interviews with voters in France and the Netherlands. Based on this unique material, the study identifies different roads to the radical right and compares them within a cross-national perspective. In addition, through an analysis of almost 1400 tweets posted by Geert Wilders and Marine Le Pen, the book shows how the latter are able to appeal to different groups of voters. Taken together, the book thus provides a host of important new insights into the heterogeneous phenomenon of radical right support.

The event will be live on Zoom. Please use this link.