Håkon Larsen has written the chapter, "The crisis of public service broadcasting reconsidered: privatization and digitalization in Scandinavia" in this new collection of essays that brings a dramatically different perspective to bear on the contemporary 'crisis of journalism'. 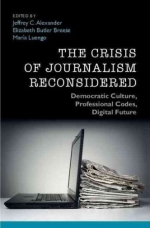 This collection of original essays brings a dramatically different perspective to bear on the contemporary 'crisis of journalism'. Rather than seeing technological and economic change as the primary causes of current anxieties, The Crisis of Journalism Reconsidered draws attention to the role played by the cultural commitments of journalism itself. Linking these professional ethics to the democratic aspirations of the broader societies in which journalists ply their craft, it examines how the new technologies are being shaped to sustain value commitments rather than undermining them. Recent technological change and the economic upheaval it has produced are coded by social meanings. It is this cultural framework that actually transforms these 'objective' changes into a crisis. The book argues that cultural codes not only trigger sharp anxiety about technological and economic changes, but provide pathways to control them, so that the democratic practices of independent journalism can be sustained in new forms.

The contributions are original, researched and well-written, so readers will engage with a new argument on the contemporary crisis of journalism

By offering a conceptual and empirical evaluation of recent changes in journalism, the book offers a distinct perspective and analysis