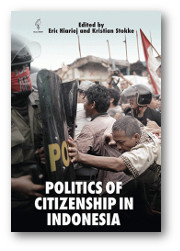 The core argument of this book is that citizenship is produced and practiced through movements against injustice. These take the shape of struggles—by people at the grass-roots level and middle classes and their representing organisations and activists—for cultural recognition, social and economic justice, and popular representation. Such popular struggles in Indonesia have largely ended up engaging with the state through both discursive and non-discursive processes. While the state is a common focal point, these struggles are fragmented across different sectors and subject positions. Developing chains of solidarity among fragments of struggles is highly important, yet attempts at bridging fragmentation leave much to be desired.

The character and fragmentation of popular struggles reflects the diversity of injustices and subject positions in society, but is also shaped by political dynamics. The struggle for citizenship and the historical development of democracy in Indonesia are closely interwoven. The inability to bridge fragmentation among citizenship struggles mimics pro-democracy movements' lack of capacity in building broader alliances. Likewise, these movements' tendency toward elitism and habit of penetrating the State also characterise current struggles for citizenship.

In this situation of multiple injustices, collectivities and mobilisations, it could be argued that democratic representation and politics is the foremost arena for integrating and transforming antagonistic relations within fragmented popular struggles. However, this requires a democracy that not only has sovereign control over public affairs, but also contains robust channels and organisations for political representation. In Indonesia, it is found that formal democracy is underperforming in this respect. It is thus a foremost concern to transform democracy itself, also as a means for transforming structures of injustice in society. The development of transformative agendas, organisations, and strategies remains a continued need and challenge for the realisation of citizenship in contemporary Indonesia.