The Saho of Eritrea: Ethnic Identity and National Consciousness

Abdulkader Saleh Mohammad, senior research fellow at the Department of Sociology and Human Geography, presents in this book an analysis of the identity of the agro-pastoral Saho community in Eritrea, which was cemented during centuries of confrontation with Abyssinian rulers and by their rebellion against external domination. 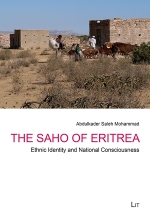 The book goes on to examine the emergence of the Saho's national consciousness and the process of political identity formation during the British Military Administration in competition with the pro-Ethiopian Unionist Party. The book describes the active participation of the Saho in the national liberation struggle of Eritrea and evaluates the impact of post-independence policies of the EPLF/PFDJ government on the Saho community.