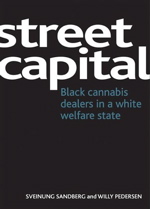 'Street capital' introduces the worlds of young black men dealing cannabis at a drug scene called The River in Oslo, Norway. The lives of these men are structured by a huge and complex cannabis economy and they are involved in fights, robberies and substance abuse. They lack jobs and education, and many of them do not have family or close friends, yet they do have 'street capital': the knowledge, skills and competence necessary to manage life on the streets.Centred on this concept of 'street capital', this unique book presents a new theoretical framework - inspired by and expanding on the work of Pierre Bourdieu, the French sociologist - for understanding street cultures. It is based on extensive fieldwork and repeated in-depth interviews with dealers aged between 15 and 30, which explore themes including marginalisation, discrimination, cannabis dealing and drug use, violence, masculinity, hip-hop culture, experiences with the welfare system, and issues of immigration and racism. The book also analyses the discursive practice of marginalised people on the street and identifies the narratives by which these young men live. 'Street capital' is aimed at postgraduates and academics in criminology, race and ethnicity, sociology, social theory and methodology. It will also be of interest to a wider social science audience, particularly those interested in using Bourdieu as a theoretical model.

Trajectories to The River

Between the street and the welfare state

The authors offer a fascinating and clear account of the structural forces weighing upon immigrant marijuana sellers who scramble for dignity and meaning in the heart of a Nordic welfare state. They make sense of the disconcerting phenomenon of the persistence of street-based, down-and-out populations in a wealthy social democracy and offer paths out of the impasse. This sensitive ethnographic account is filled with the words of the youths themselves, revealing their search for respect in the underbelly of the Norwegian dream. Philippe Bourgois, Professor of Anthropology, University of Pennsylvania

Sandberg and Pedersen's book is a perceptive ethnographic study of a particular social world, giving a voice to multiple players in the street scene they study.  Robin Room, Professor of Social Research in Alcohol, University of Melbourne

This is a book in the great tradition of studies of street-corner societies. But the arena is exceptional; a riverside in the capital of a Scandinavian welfare-state. It is an analysis sharpened by new tools that makes for new insights. Nils Christie, Professor of Criminology, University of Oslo

This book is available at the University Library in either printed or e-book form*.

*May require logging on to the UiO network.