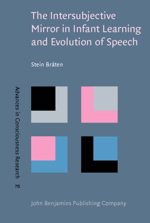 The Intersubjective Mirror in Infant Learning and Evolution of Speech illustrates how recent findings about primary intersubjectivity, participant perception and mirror neurons afford a new understanding of children’s nature, dialogue and language.

Based on recent infancy research and the mirror neurons discovery, studies of early speech perception, comparative primate studies and computer simulations of language evolution, this book offers replies to questions as: When and how may spoken language have emerged? How is it that infants so soon after birth become so efficient in their speech perception? What enables 11-month-olds to afford and reciprocate care? What are the steps from infant imitation and simulation of body movements to simulation of mind in conversation partners?
Stein Bråten is founder and chair of the Theory Forum network with some of the world’s leading infancy, primate and brain researchers who have contributed to his edited volumes for Cambridge University Press (1998) and John Benjamins Publishing Company (2007). (Series B)
Table of contents
List of illustrations   ix–x
List of tables           xi
Preface (with acknowledgments)            xiii–xxii
Part I. Background for questions and findings inviting a paradigm shift
Chapter 1 From the last century history of ideas on children’s nature and intersubjectivity    3–28
Chapter 2 Recent related findings making a difference: Mirror neurons and participant perception     29–56
Chapter 3 Introduction to child’s steps to speech in ontogeny and questions about cultural evolution   57–88
Part II. On the origin of (pre)speech and effi cient infant learners
Chapter 4 On language evolution and imitative learning: What can computer simulations tell us?       89–118
Chapter 5 On cultural evolution of mother-centred learning: Comparing humans and chimpanzees    119–146
Chapter 6 On prosocial behaviour in adult apes and young children: Roots of genuine altruism?     147–162
Part III. Intersubjective steps to speech and mind-reading in ontogeny
Chapter 7 From newborns’ imitation: On primary intersubjectivity and perturbations   163–188
Chapter 8 From object-oriented joint attention and other-centred infant learning      189–208
Chapter 9 On children in conversation and in self-dialogue       209–244
Chapter 10 When conversation partners become virtual co-authors of what the other is saying    245–270
Chapter 11 When the intersubjective mirror has been biologically broken: The autistic spectrum   271–288
Chapter 12 The intersubjective steps in retrospect and guidance, and prospects for further research    289–304
Glossary 305–308
Bibliography   309–336
Author index    337–342
Subject index    343–352
“Stein Bråten's last book provides an incredibly rich and original perspective on the evolution and development of infants' (pre)verbal intersubjectivity. Bråten beautifully masters the most relevant literature in Philosophy, Developmental and Comparative Psychology, Cognitive Neuroscience and Computer Science guiding the reader in a fascinating journey. A must read for everyone interested to learn how the human mind develops.”
Vittorio Gallese, University of Parma
“In one of the most detailed and erudite treatises today, Stein Bråten explains how we relate to each other driven by evolutionarily ancient impulses. Instead of the traditional focus on human intelligence, Stein Bråten stresses the body and how it is moved by other bodies. A very compelling account of how we came to be such incredibly social primates.”
Frans de Waal, Emory University, Author of 'The Age of Empathy' (Harmony, 2009).
By Matthew Whiting
E-mail this page