Grete Brochmann: From Bounded Universalism to the Trial of Internationalisation: Migration and Social Democracy in Scandinavia

Chapter in a special edition of Comparative Social Research, titled Social Democracy in the 21st Century, 2021 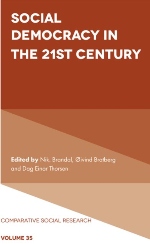 Immigration represents one of the most contentious and complicated issues for social democracy in many national contexts. In Scandinavia, the social democratic parties have been particularly tormented, being split internally on central concerns related to immigration policy. Social democratic parties in Scandinavia have had a basically ambiguous relationship to the issue from the initiation of the era of ‘new immigration’. This chapter argues that this can be explained by the specifically strong attachment and ‘ownership’ of these parties to the Scandinavian welfare model, with its particular claims on a strong tax base and an orderly labour market. ‘Social democracy’ is dealt with mainly as an institutional and political entity, close to what goes as ‘The Nordic Model’ in the international literature. The chapter describes and analyses similarities and differences between the three Scandinavian countries, through a historical exposé of the period after the early 1970s; on the one hand, the institutional and normative prerequisites for social democracies in handling migration, and on the other hand, the way in which recent flows of migrants have influenced the very same social democracies. Theoretically, the chapter is drawing on conceptual tools from political economy, citizenship discourse and institutional theory.