Camilla Houeland explores relations between popular protests and institutional politics in Nigeria's petroleum-dependent economy in an article in The Extractive Industries and Society. 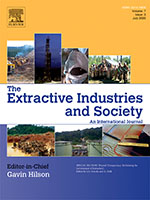 This article explores relations between popular protests and institutional politics in a petroleum-dependent economy. The 2012-protest against fuel subsidy removal in Nigeria was one of the biggest popular mobilisation in Nigeria’s history, and possibly the largest in the wave of protests in Sub-Saharan Africa. This article uses perspectives of contentious politics that bridge structure and agency through a focus on relational dynamics between protests and institutional politics. This article makes four interrelated claims of how the protests are conditioned by and contribute to institutional politics: First, the protests builds on a historical trajectory of labour-led subsidy protests that in itself form part of institutionalised politics. Second, the 2012-protests were historically large due to the particular context of a decade of democracy and oil-led growth, without a popular sense economic justice and real political participation. Third, while new actors came to the scene in 2012, intra-movement fragmentation exposed trade union and civil society weaknesses and failure to build a sustained social movement. Fourth, the 2012-protests inspired civic agency and influenced institutional politics and state-citizen relations, especially reflected in party politics and elections

Read the article in The Extractive Industries and Society.