Transition to Democracy or Hybrid Regime? The Dynamics and Outcomes of Democratization in Myanmar

Myanmar’s political trajectory remains open-ended, but at least for the time being it seems to be a relatively stable hybrid regime, write Kristian Stokke and Soe Myint Aung in an article in The European Journal of Development Research. 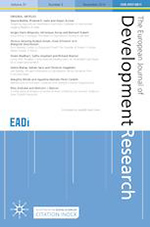 This article analyzes Myanmar’s transition from authoritarianism and asks if it represents a transition towards democracy or a hybrid form of rule. Starting from theoretical debates about modes of transition, the article examines competing discourses on Myanmar’s opening and argues that it resembles an imposed more than a negotiated transition. Next, the article analyzes the links between this mode of transition and its outcomes, and finds that contemporary Myanmar is characterized by a combination of formal institutions for democratic representation, civilian government, and power-sharing, and problems of weak popular representation, limited civilian control of the military, and continued centralization of state authority. The article concludes that Myanmar’s political trajectory remains open-ended, but also that Myanmar, at least for the time being, seems more accurately described as a relatively stable hybrid regime than as a country that is in transition to democracy.