Emma Arnold has published the paper ‘Aesthetics of zero tolerance’ in the journal CITY: analysis urban trends, culture, theory, policy, action. The paper draws on psychogeographic and photographic fieldwork conducted in Oslo to examine the aesthetic implications of zero tolerance policy against graffiti. 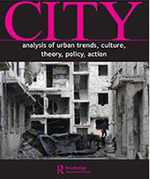 Zero tolerance policies against graffiti are rooted in moral panic and ‘broken windows’ theory, forging connections between illegal interventions in the city and social disorder. While these connections are now widely recognised as unfounded, they persist in anti-graffiti policy. Versions of the New York model of zero tolerance against graffiti were instituted with unique severity and with some peculiarities in Nordic cities such as Oslo, Stockholm, and Helsinki in the late 1990s and early 2000s. Strict policy rarely has the intended effect of ridding the city of graffiti and other unwanted expressions. Undesirable interventions persist despite intense media and education campaigns, graffiti removal schemes, harsh punishments, and even modicums of censorship. The Norwegian capital of Oslo implemented a policy of zero tolerance against graffiti in 2000. Taking Oslo as its focus, this paper strives to uncover aesthetic consequences of such policy and looks for indications of what makes the zero tolerance city distinct. Drawing upon psychogeographic and photographic fieldwork conducted in Norway between 2013 and 2017, four potential consequences emerge: the creation of aesthetic tensions; the presence of buffed and negated spaces; changes in graffiti style and form; and differences in the scale of street art. This paper concludes by proposing that cities allowing for more agonism and tolerance may enable more meaningful and democratic creative expression of its citizens, leading to more diverse and vibrant urban aesthetics.