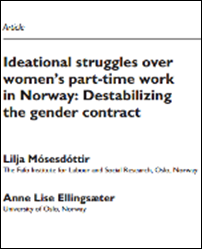 High rates of part-time work have been associated with high female employment rates in the Nordic countries, except for Finland. Part-time work has played a key role in the modification of the male breadwinner gender contract by enabling women to enter paid work while continuing to take on the main domestic responsibilities. Previously tacit and little disputed, this ‘normalization’ of women’s part-time work has increasingly become a contentious issue in the public debate in Norway, both in terms of its persistently high level and of the cultural values surrounding it. In their case study, the authors analyse the articulation of these critiques and the underlying conflict dynamics that put the gender contract under pressure and facilitate its modification. The empirical focus is on events inciting debates and the arguments or ideational frames key political actors have used to support their position. The analysis is based on newspaper articles published during the period 1997–2013.