Immigrants and Descendants in Oslo

As in most other European countries, the composition of the population of immigrants and their descendants in Norway is heterogeneous to the extent that it is almost pointless to speak of it as a whole.

Currently, Norway’s largest immigrant group is the Polish (labour migrants), which surpassed the Pakistanis during 2007. The Swedes (who mostly stay only for 5 years or so) are the third largest group, followed by the Iraqis, Somalis and Vietnamese. More than 90 % of the Iraqis, Afghans, Somalis and Bosnians have come to Norway as refugees. The immigrant population in Oslo is also marked by ethnic variety, and the largest groups are people of Pakistani, Somali and Sri Lankan background.

In order to shed light upon the diversity of experiences and backgrounds that exist among young adult immigrants in Oslo, the Norwegian research team has interviewed more than 40 young men and women with backgrounds from around thirteen countries. The majority are descendants (i.e. children) of labour migrants, followed by those who came through family reunification, as well as some refugees. The interview sample from Oslo covers a large variety of working experiences ranging from South-Asian students in elite professions to young men and women (mainly from Turkey, Pakistan and Somalia) who started their working life after upper secondary school. In addition to school pupils, students and informants who work, we are also interviewing people outside the labour market, such as young adults who are on welfare, unemployed, in prison – and people outside the legal labour market – such as prostitutes. 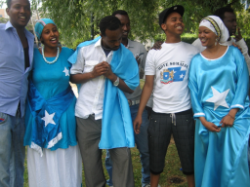 Oslo has a striking east-west socio-economic divide, demarcated by the Aker River that flows through the city. The west side is associated with high living standards, while the east- side has traditionally been dominated by working class citizens and lower standards of living. In the outskirts of the city on the east, north and south side, there are both new and old suburbs. These are dominated by high- and low-rising apartment buildings. Although the disadvantage of people living in these suburbs is maybe not as urgent as in the ghettos of Paris, or the suburbs of Malmö and Gothenburg in Sweden, there is stigma attached to these areas of the city. Statistics show that people living in the suburbs are more disadvantaged when it comes to for example issues of health, employment and education.

The patterns of immigrant settlement have followed the traditional geographic city divisions, as most low-income (often non-Western) immigrants have settled in old working-class neighbourhoods. Additionally, the housing market in western Oslo is less accessible to visible minorities than ethnic Norwegians and European immigrants. Geographically, the EUMARGINS informants are dispersed over a large area of the city – from the North- and South-Eastern suburbs of Oslo to affluent high-status areas in the Western part of the city. Still, the majority of the informants live in (North-) Eastern Oslo, in suburbs with a large proportion of immigrants or in central inner Oslo, which also comprise neighbourhoods with a substantial amount of people with an immigrant background.

Some of the informants talk about experiences of being marked as ‘different’, and relate it to their characteristic as visible minorities. Some base their perspectives upon experiences from different places in Norway, and others talk more about their relation to different parts of the city. 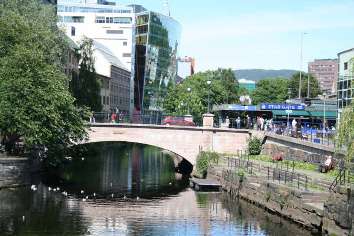 Those we have talked to who have lived in smaller places in Norway before coming to Oslo, reflect upon the impact these different settings have for feeling of belonging. One thinks she has benefited from living in a small town in Western Norway before moving to Oslo: 'I feel a bit more enlightened about the country, its history and culture. While those living here are a bit more Oslo east. They aren’t very interested in Norway; they just live in their own Oslo bubble.'

Some say they feel less ‘different’ in Oslo and think of the city’s multiculturalism as a path to greater inclusion, in comparison with the lack of diversity that characterizes smaller places. For instance, 'Lien', a descendant of Chinese immigrants, had a rough time growing up in a small place. Her family was the only one with an immigrant background, and Lien was bullied. Her life got better when she started at a school in a place that was slightly more diverse, and even better when she moved to Oslo; 'After I moved to Oslo, I’ve hardly had any racist experiences. It was even better than upper secondary school – even there it was much easier because it was bit more multicultural than where I grew up. Oslo was even better, because it’s more mixed'. Similarly, Jasmina, a Bosnian immigrant who first settled with her family in a small western Norwegian town, states that she has had few negative experiences; ‘When I came to Oslo, the class automatically had immigrant youth. It was normal to see Pakistanis with a hijab in the class room. And you don’t see that in the town I lived in before, because it’s a quite small place.’

Being able to meet people with a similar country background can provide a sense of community and inclusion. Isir, a nineteen year old girl of Somali origin, came to Northern-Norway as an asylum seeker when she was eleven. A year later, Isir moved to her family in Oslo. The contrast was large from being the only coloured girl in class in a town where there were only two other families with a Somali background. 'Oslo felt more like a city, not like a village. So I think it’s nicer. And I meet many youth like me, some who have lived in Oslo for many years and some I know from Somalia. It was very good.' In Oslo, Isir got fewer questions from ethnic Norwegians about her background and colour of skin.

Smaller places are however not always characterized negatively in comparison with the city, and some have found it easier to get in touch with ethnic Norwegians outside of Oslo. For instance, a young Kurdish refugee, who spent most of his life in a town in Northern Norway, feels alien in Oslo because he feels that compared to where he lived before ‘the immigrants stick to themselves, and the Norwegians stick to themselves.'

There is a certain stigma attached to some of the suburbs in Oslo in which a high percentage of people with immigrant backgrounds are residing, and the east-west divide of the city is reflected in our interview material. Our research indicates that youth with a minority background have different experiences of living in a suburb – ranging from distancing via indifference to identification. The stigmatization of the North-Eastern suburbs in Oslo can, on one hand, lead to a feeling of collective exclusion, on the other hand, it can open up for alternative forms of inclusion based on the experienced sameness and common destiny of being foreigners. In addition, there are those who live in the suburbs, but who do not want to identify with their neighbourhood, as it is associated with criminality, the use of drugs and to lack of future possibilities.

Some informants living in eastern Oslo suburbs sense the stigma and would like to move elsewhere. 'Mustafa' is a law student with a Turkish background who lives in a suburb with a high percentage of people with a minority background. He describes his neighbouring area as marginalized, and comments about the people he sees on the metro: ‘The only Norwegians you see there are either drug addicts or retired, depressed people. Among the friends I meet on the metro, they just speak about how much drugs they sold. You can count on one hand those who do well. Or at least done something. Even Norwegians don’t do well there.’ Mustafa doesn’t like spending much of his time in his neighbourhood.

Some informants feel excluded in other parts of town than where they live. Here both skin colour and class can act as a barrier. 'Kenan', a young descendant of Turkish immigrants who lives in a North-Eastern suburb, says that he feel people stare at him when he goes to the more affluent western part of Oslo: 'when I’m in that area, I feel alien. Because everyone is thinking: look at that idiot! Look at that nigger! What’s he doing here? All of them are wearing Gucci clothes, and luxury clothes. I also have luxury clothes, but I always wear sporty clothes, they are more basic.’

‘Parveen’, a psychology student and descendant of Indian immigrants who lives in Western Oslo, experienced discrimination when she applied for part time work in a bakery chain. The interviewer wanted to place her in a bakery in Oslo east because she didn’t find her ‘appropriate’ for the vacant position in the bakery in Oslo west. ‘I just sat thinking that it was way out of line, and ended with leaving the interview’, says Parveen. ‘Taiba’, a medicine student with an Indian background, lives in a neighbourhood where her family is the only one with an immigrant background. She has experienced racist comments there, sometimes in person, sometimes in writings. She answers them directly or writes back, which has ‘made them realize they can’t pick on us just because we are foreigners’.

Some of the informants living in eastern parts of Oslo distance themselves from the west side. For instance, Abebe – a young man with an Ethiopian background - stated that he and his friends ‘don’t go near the west side. Only if we have friends who live there. It’s not somewhere one likes to spend time!’ In such cases, it is not necessarily persons who exclude, but the small presence of people with a visible minority background can be experienced as an excluding factor in itself. Whilst ‘east side loyalty’ of this kind also is not unique people with a minority background, their shunning of the west can in effect amplify the tendency of geographical ethnic separation in Oslo.