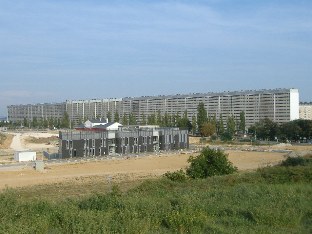 Metz-Borny: is a residential district accommodating communities from all the immigration countries to France. The principal nationalities represented are Algerian, Moroccan, Turkish, Italian, Portuguese and Vietnamese. The district is at the same time a digest of Africa, Eastern Europe, and the Middle East. There are important differences between the immigrant populations of the 1960s and 1970s and the more recent immigrant populations.

The investigation includes the district of Nancy-haut-du-lièvre, which has characteristics very similar to Metz-Borny, in the other large town of Lorraine. The comparative interest lies in the fact that the public policies affecting the immigrants intervened in the two districts at different times (1985 and 2006 for Nancy-haut-du-lièvre; 2000 for Metz-Borny.) The significance of the emergence of student population in the district of Nancy-haut-du-lièvre in the 1990s is of specific interest since these student populations can themselves result from immigration into another area, Lorraine, which has been one of the greatest European areas for the reception of foreign populations since the end of the 19th century.