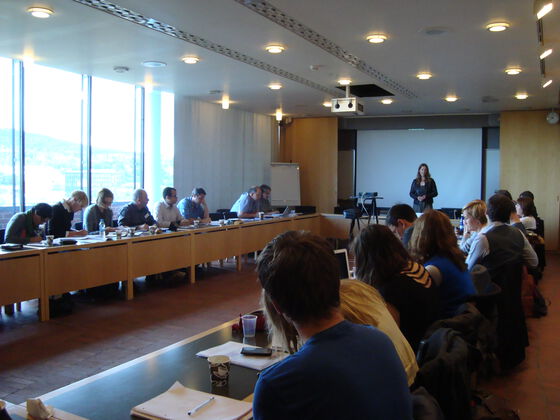 The EUMARGINS is pleased to announce that our final conference on the 'Inclusion and Exclusion of Young Adult Immigrants' took place on 14 September 2011 at the University of Oslo, Norway (Rådssalen, Lucy Smith Hus), 09:00-16:00.

The conference presented the results of the research carried out in the EUMARGINS project by discussing the findings from our seven national contexts and the cross-national comparison with the scientific community in Europe and worldwide. The aim was to contribute to a heightened and more nuanced knowledge of the barriers and bridges that young adult immigrants and descendants face in society.

For an overview of the selected speakers and discussants at our conference.

"Ladies and Gentlemen, here is Norway..."

Linkiesta, an Italian newspaper, published an article on 7 August 2011 showcasing various sectors of Norway, titled Signore e signori, ecco a voi la Norvegia (in Italian). On immigration policy, Associate Professor Katrine Fangen confirmed that Norwegian policy does not vary significantly from its neighbouring countries. As in many other European countries, Norway seeks to ensure limited and controlled immigration. As for multiculturalism, she explained that “although it is not an official policy of Norway, it has developed into an official strategy of integration. For example, mother tongue teaching in school, times reserved for Muslim women in swimming pools, and several other services geared towards successfully integration immigrants into Norwegian society.”

Is Norway an open society?

Associate Professor Katrine Fangen was interviewed for an article in Pravda, a major newspaper in Slovakia, on the topic of the Norwegian open society and immigration, particularly following the recent events that occurred in Norway. She believes that Norway is an open society in terms of public debate, and that the major media provide space for all viewpoints e.g. on the immigration issue.

Aftermath of the Terrorist Attacks in Norway

The article, "One racist's murderous marketing exercise?" ("Mejor conocer cómo piensa el asesino") originally published by the Spanish newspaper, El Pais, on 28 July 2011 discussed the aftermath of the deadly twin terrorist attacks that occurred in Norway. In the article, Associate Professor Katrine Fangen (Norwegian Research Team) and Professor Carles Feixa (Spanish research team) were both asked to comment on the possible societal effects, particularly on young people, of the tragic events that were carried out by Anders Behring Breivik.

EUMARGINS has recently been approached by the UN Alliance of Civilizations (UNAOC) Secretariat in New York to join their community of practitioners promoting integration practices across the world. The Alliance works with a global network of partners in four program areas: youth, media, education and migration. In the field of migration, the UNAOC and the International Organization for Migration (IOM) have jointly built an online community on the Migration and Integration: Building Inclusive Societies (IBIS) aimed at promoting practices of integration. We will be collaborating with the alliance as well as continuing to share our own findings and publications with them. A Discussion with Politicians in France

On Saturday, 9 July, Researcher Vincent Ferry organized a discussion with politicians in Lorraine, France. He presented the EUMARGINS research results based on several themes: employment, education and qualifications, identity, participation, perceptions of their neighbourhood and so forth. Following the discussion, a debate emerged among the politicians producing a selection of policy suggestions that would be brought back to the political parties they represent. The third EUMARGINS newsletter (May 2011, Vol. 3) contains a wide selection of project news, some of which are: a comprehensive overview of the project in May; a positive review of our first book, ”Inclusion and Exclusion of Youth Adult Migrants in Europe,” Katrine Fangen, Kirsten Fossan and Ferdinand Andreas Mohn (eds.) published in the Journal of Youth and Adolescence; and an illustrative case from the French national context: Isabelle’s Story. A positive review of our first book, "Inclusion and Exclusion of Young Adult Migrants in Europe: Barriers and Bridges," was published online by the Journal of Youth and Adolesence on 7 April 2010. In her book review, Anna Triandafyllidou, reveals that the book is "interesting and useful to the reader who seeks to gain a sold background knowledge on migration, migrant youth and integration issues across Europe" and that "it covers an important and wide spectrum of national experiences and policies of social inclusion and exclusion processes that migrant youth face in Europe." The EUMARGINS team is pleased to announce that the final manuscript of our second book, "Young Migrants: Exclusion and Belonging in Europe," delivered to Palgrave Macmillan last month has been well-received by the publisher and is being sent into production this week. The second EUMARGINS newsletter (April 2011, Vol. 2) includes a comprehensive overview of the project in April and highlights from the lived experience of a young adult immigrant in Spain, Suelí’s case.

Suelí’s case represents the second illustrative case from the Spanish national context. At 29 years old, Suelí's slightly older than the average EUMARGINS sample (18-25 years of age), nevertheless, she represents the conflict that many young adult immigrants face in  Europe today, particularly after the 2008 financial crisis. On 4 April 2011, EUMARGINS Scientific Coordinator, Katrine Fangen, has been invited to be a commentator to a speech given by the Secretary General of the Council of Europe, Thorbjørn Jagland. She will highlight some relevant findings from the EUMARGINS project. The Dynamics of Inclusion/Exclusion

On 16 March 2011, Researcher Thomas Johansson of the EUMARGINS Swedish team, gave a presentation on the "Social Exclusion and Inclusion of Young Immigrants in Europe" at the Högskolan Väst, University West, in Sweden. Welcome to the first publication of our monthly newsletter (March 2011, Vol. 1) dedicated to European conditions for the  inclusion and exclusion of young adult immigrants and descendants.

The aim of this newsletter is two-fold, firstly, to keep you informed of the project developments, publications and findings and, secondly, to build awareness about the issues, including the barriers and bridges, that relate to this category of young adults in order to gather a more nuanced understanding of the problems at hand as well as their subsequent solutions. EUMARGINS research team members met last week for a two-day project meeting (February 18 and 19, 2011) in Oslo, Norway.  All the research sites were represented, including Estonia, France, Italy, Spain, Norway, the UK and Sweden. The meeting took place at the Department of Sociology and Human Geography at the University of Oslo.

On 29 January 2011, EUMARGINS Scientific Coordinator, Katrine Fangen, gave a presentation on the methodology chapter from the second book of the project being published by Palgrave Macmillan.

On 12 April 2011, Researcher Vincent Ferry of the EUMARGINS French team, will give a presentation (in French) on the EUMARGINS first book "Inclusion and Exclusion of Young Adult Migrants in Europe: Barriers and Bridges," published by Ashgate at the Forum IRTS de Lorraine.

Interview with Katrine Fangen on EUMARGINS

The Department of Sociology and Human Geography at the University of Oslo has recently published an interview with Scientific Coordinator Katrine Fangen on EUMARGINS policy recommendations and the importance they have for understanding the larger implications that research holds. EUMARGINS research team members met recently for a two-day project meeting (November 29-30, 2010) in Barcelona, Spain. The discussion was devoted to the second book of the project and allowed for fruitful interaction among all the research sites. The meeting took place at the Faculty of Geography and History at the University of Barcelona.

Young Lives on the Move: Borders, Exclusion and New Hierarchies of Belonging

On 8 November 2010, EUMARGINS' researcher Professor Les Back visited Princeton University to give a talk entitled "Young Lives on the Move: Borders, Exclusion and New Hierarchies of Belonging." The discussion that followed generated excitement concerning the new ideas on exclusion and inclusion of young adult immigrants.

At the 'Youth and Social Exclusion' preparatory meeting in Brussels on November 15-16, scientific coordinator Katrine Fangen will present advancements, visions and policy recommendations of the EUMARGINS project and participate in the discussion with coordinators of similar EU-funded projects, in order to create a synergy between the projects. The meeting is lead by Project Officer in Brussels, Marc Goffarth. Kristina Kallas from the Estonian based EUMARGINS-team wil also participate at the meeting.

Scientific Assistant Erlend Paasche of the EUMARGINS' Oslo team will present a paper at the TRANSMIG conference in Stockholm on November 4-5. The paper has been co-written together with scientific coordinator Katrine Fangen. Title of the paper is: 'Transnational Involvement: Reading a Statistical Study in Light of Qualitative Data'.

Second EUMARGINS book to be published by Palgrave MacMillan

We are happy to announce that Palgrave MacMillan has accepted to publish the second book of the EUMARGINS project (the first one was published by Ashgate in June 2010). This book will be based on analyses of 250 lifestory interviews with young adult migrants and descendants living in seven European countries. The book chapters will make cross-national analysis of the material focusing on themes like migration, work, education, political and civic participation as well as on feelings of identity and belonging.

Read more ...
Participatory Forum - Building Together a Society for All – A Circus against exclusion

The European Commission’s Directorate-General for Employment, Social Affairs and Equal Opportunities organizes the Participatory Forum'Building Together a Society for All – A Circus against Exclusion' which will take place in Brussels on 19 and 20 October 2010. During the session on 'Social Inclusion of migrant youth: Breaking the inter-generational transmission of poverty and social exclusion' Scientific Coordinator Katrine Fangen will present results from the EUMARGINS research project. Participation in the forum is open for the public.

The University of Bergen, through its Department of Sociology and IMER/UiB, organized a joint conference and PhD course around the theme of 'First Generation Nationals' on September 27-30, 2010. The event was an attempt to elucidate several issues of major importance with respect to understanding the diversity of our societies. During the session 'The structural trajectories of second generation immigrants', EUMARGINS' Scientific Coordinator Katrine Fangen presented the paper 'Opportunities and barriers in education for young adult descendants in seven countries: Findings from a European qualitative cross-national study'. See the whole program.

The conference 'Researching Migration in Europe - Empirical research, theoretical and methodological challenges' took place in Vienna on September 19-22, 2010. During the conference, EUMARGINS' Scientific Coordinator Katrine Fangen chaired and gave introductory remarks to the discussion of session 5: 'Attitudes towards immigrants'.