Our project is guided by several a priori hypotheses, some of which can be tested by the statistics we are reviewing, others of which can partly be tested by our qualitative data (but not tested in a strong sense of the word, such as is possible when using statistics). Our approach to the qualitative material will be that of analytical induction (Becker 1979), meaning that we will look for patterns in our material, as well as testing these by searching for negative cases. In the following paragraph, we will present some of these a priori hypotheses which are guiding our analysis of the datamaterial: 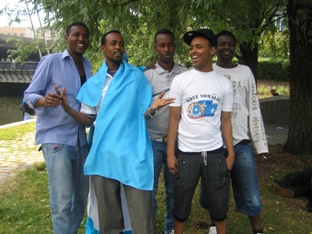 The significance of differences

We question whether differences in the background and earlier experiences of young adults with immigrant background who participate actively in society at different levels compared with those who do not are important. Related to this is also the question of how difference is made in the normative conceptions of the society as a whole. Quantitative research seem to confirm that class background, as well as migration history, have impact on factors such as grades in school, dropout rate, length of education, relation to labour market etc. In our qualitative study, we seek to explore a greater variety within the categories, for example by including immigrants that, according to their background and in line with quantitative research findings, one would assume to be in a marginalized position, but who are fully participating in society, taking higher education and/or working in well-remunerated jobs.

We will reveal the different modes of social citizenship, in the sense of competence, participation and responsibility, and see if these varieties are enacted differently among young adults with different immigrant and class backgrounds and if these differences are related to the complex interplay of ethnicity, class, gender and (sub)urban context.

The process of becoming an adult is “mixed” with the process of becoming a citizen, or being integrated. What ‘to become a citizen’ means, differs in different cultural and national contexts, also within Europe. This is partly a legal question, marked by when a person ‘comes of age’ in each country, and is allowed to vote, to buy alcohol and to drive a car etc. But it also varies in-between countries and cultures when one is defined as adult, and thus as a responsible citizen in the sense of attending higher education, beginning to earn for ones own living, establish a family etc. The success or failure of this process is played out not only in educative institutions (school and family), but also in the arena of the labour market, civil society and leisure spaces. In this sense, the integration of migrant young adults in those spaces is a crucial indicator of social exclusion/inclusion of the next generations.

Studying the differences between young adult immigrants’ challenges, difficulties and opportunities in different European countries is an important ambition of the project. Initially, we look at such differences with reference to previous quantitative studies, followed by a consideration of the same differences in light of our qualitative material. We assume that some of the different challenges, difficulties and opportunities for young people with immigrant background are related to their different migration histories and class backgrounds, not to differences of ‘culture’ (Modood ref.). It is not the difference per se but the ways in which that ’difference’ makes a difference. Opportunities might imply a decision-making dimension in which socio-cultural variables might play an important role for young adult immigrants as agents.

Social exclusion as a process

We consider how social exclusion is the result of a social process entirely managed by limits and constraints set in host societies through juridical, political, economic and cultural norms and values. Exclusion comes in various forms, but is largely defined via host countries’ social norms, and at the same time through the distance between those norms and original ones: a new set of social norms defining a new world of social interactions, shaking former identity (either for the youngsters themselves or in passing to the new generation).

A part of this analysis is to question whether social exclusion is the result of lack of access to material and non-material resources potentially made available in the context of a host society and their effective take over as “opportunities” by young immigrants. What are the forces inhibiting young immigrants taking up opportunities within the host society? Do they choose other forms of inclusion different from the normative model? Opportunities might imply a decision-making dimension by young immigrants themselves as actors in which socio-cultural variables might play an important role. 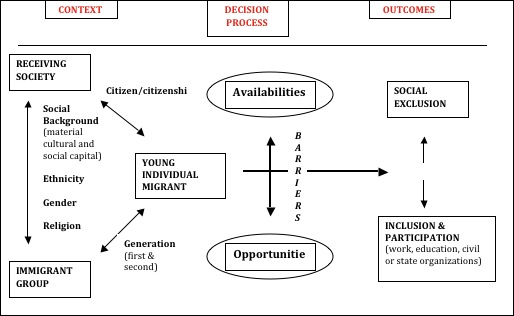