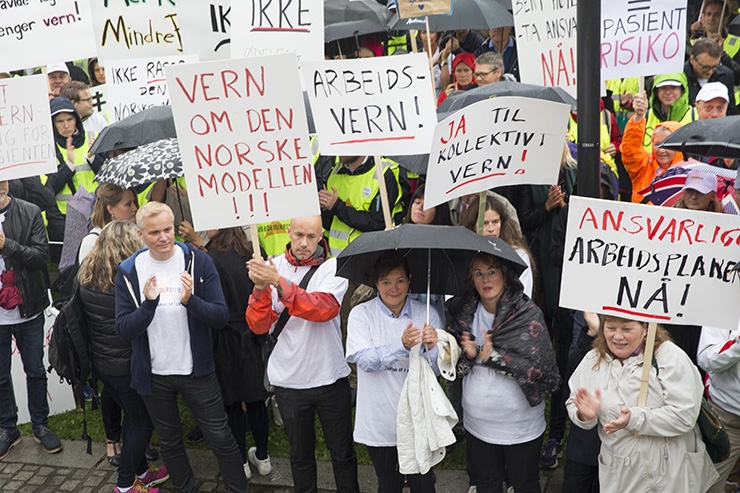 For almost a decade, he has headed the Centre for the Study of Equality, Social Organization and Performance (ESOP) at the University of Oslo. What has surprised him the most during this period is the strong link between the social safety net and capitalist dynamics.

- It used to be generally accepted that the welfare state is an alternative to economic competition and that well-developed welfare arrangements are the antithesis to a capitalist way of thinking. But it transpires that well-developed benefit schemes actually support capitalist competition in many countries, says Moene, pointing to the highly successful author J.K. Rowling.

When she wrote the first Harry Potter book she was a single mother living on benefits.

- Who knows if there would have been a book without that support? She is not the only one. Many who have later gone on to become wealthy individuals, received support from the welfare state in an earlier phase of their life.

ESOP is now winding up its work as a Centre of Excellence, but will continue its activities at the Department of Economics. To mark the transition, ESOP will be holding a conference on 27 October: “The Future of Egalitarianism”. The last decade the global trend has been towards greater inequality rather than greater equality, even if the picture is not black and white.

- These are important self-reinforcing mechanisms in the economy and in politics.

Inequalities in the economy lead to policies that confirm these inequalities and often prepare the ground for further inequality. Or the other way around, like in Scandinavia, where we have been reducing inequalities for a long time by introducing generous welfare arrangements, says Moene.

Putting an end to the scare stories

According to Kalle Moene, the lesson from Scandinavia is that there is no truth in the scare stories about great inequality being required in order to secure positive economic performance.

- It is easy to put an end to that misconception. It works the other way around: equality contributes to a positive development. It is difficult to give a positive spin to developments that generate a high degree of inequality when only a small group of people get to reap the rewards.

As a researcher, he has no simple answers to why the inequalities are increasing in the world, except from the fact that the cycle is self-reinforcing. There are many reasons: the combination of knowledge-focused technological change and globalization; the fact that trade unions no longer play an important role in many countries; the fact that growth takes place in the service industries, where the trade unions have not traditionally held the strong position they held in the manufacturing industries.

Our modern understanding of the Nordic model stems from Kalle Moene. He points out that it is not a model cast in stone. It should rather be seen as a series of different arrangements that work in concert, adapting to new surroundings, technologies and educational patterns.

According to Moene, the Nordic model is more of a problem-solving method than a recipe for solving problems.

In Norway, this is based on the long-standing governance traditions which ensure that the government and the labour market organizations exchange information. One example is the Technical Calculating Committee on Income Settlements, whose work ensures that agreement is reached on the status of the current competitive situation and what initiatives may be required.

- Had the financial crisis had a greater impact on Norway, the government would have known that it had the labour market organizations to coordinate with and that a common understanding existed of the economic situation.  In the USA, things are very different. All parties in political and economic life hold widely different views of reality. It is difficult to agree on sensible policies when the parties have fundamentally different perceptions of the world around them.

The economics professor considers the current American election campaign to be an example of striking polarization of views; not only between the presidential candidates, but also between the groups of voters supporting them.

- The typical Republican is more conservative than 94 per cent of Democrats – up from 70 per cent twenty years ago.

The typical Democrat is more liberal than 92 per cent of Republicans – up from 64 per cent twenty years ago. We therefore see two distinct groups with highly polarized views on politics, the world, and what constitutes an acceptable political style. This links in with increasing inequality. Great economic inequality in the USA gives rise to political polarization, and political polarization contributes in turn to sustaining the great economic differences, says Moene.

- People have forgotten that the USA used to have institutions that were very similar to the ones we have in the Nordic countries, as recently as in the 1970s. Trade union membership was as high as 40 per cent in many sectors. This period saw an expansion of the American welfare state, which then came to a halt. The result was increased wage disparities and greater inequality. Europe has been the continent where the welfare state has been allowed to expand.

Unwillingness to forego anything

In other words, the welfare state has proved to be a good system for achieving equality and growth. So why are not more countries adopting the model? According to the head of ESOP, many want the results, but appear to be less keen on the mechanisms that deliver them. He points out that many have been interested in the results, without fully realizing that they will need to sacrifice something. One of the things that has secured good results in the Nordic countries, is pay moderation. Highly educated workers have therefore come much cheaper here than in other countries.

- Implementing such a policy is not likely to make you popular. Certain groups might feel they are held back. They are unable to realize their full market value. But in the long term, many have recognized that everybody have benefited from the restraint. Moderation has led to a more even economic growth which is more evenly distributed. There is a bit of a paradox here, in that you may end up with the highest wage growth in the longer term by implementing pay moderation in the short term and restraining the upper middle classes.

Better in the long term

Many of the welfare benefits studied by the researchers at ESOP have had unintended additional positive effects. Social reforms like paternity leave and subsidized kindergartens are among those found to have clear long-term effects that go beyond the original objectives. The paternity leave reform has changed the power balance within families and its implications have affected who gets promoted in the workplace. The reform has helped to reduce gender disparities in the labour market by allowing more women to contribute.

Children from underprivileged families who attend kindergarten do much better than children from similar backgrounds without the same opportunity. Children who benefit from subsidized places go on to get a higher education and do in school, which in turn contributes to their socialization.

Through to the other end of the tunnel

- But who wants to emulate the Nordic countries?

- There is great interest in learning from our experiences in countries like India, South Africa, Brazil and Colombia, to mention a few. No country can replicate another; but egalitarianism can make for an appropriate development strategy anywhere in the world as long as developments are founded on local conditions. It has helped Norway through to the other end of the tunnel. Scandinavia managed to put behind us what is generally referred to as poverty – and in doing so, we have enjoyed an economic growth which is based on a much higher degree of egalitarianism than in other countries. Poor countries want to learn from that, not in order to emulate us, but to learn from our experiences, both good and bad.

ESOP- Centre for the Study of Equality,Social Organization and Performance