The Contraction Effect: How Proportional Representation Affects Mobilization and Turnout 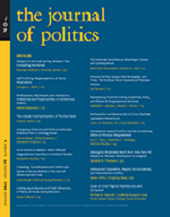 A substantial body of research examines whether increasing the proportionality of an electoral system increases turn out, mostly based on cross-national comparisons. In this study, we offer two main contributions to the previous literature. First, we show that moving from a single-member district system to proportional representation in multimember districts should, according to recent theories of elite mobilization, produce a contraction in the distribution of mobilizational effort across districts and, hence, a contraction in the distribution of turnout rates. Second, we exploit a within-country panel data set based on stable subnational geographic units before and after Norway’s historic 1919 electoral reform in order to test various implications stemming from the contraction hypothesis. We find significant support forthe predictions of the elite mobilization models.