The tyranny puzzle in social preferences: an empirical investigation 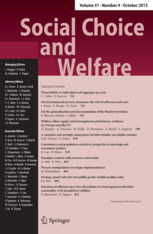 When forming their preferences about the distribution of income, rational people may be caught between two opposite forms of “tyranny.” Giving absolute priority to the worst-off imposes a sort of tyranny on the rest of the population, but giving less than absolute priority imposes a reverse form of tyranny where the worst-off may be sacrificed for the sake of small benefits to many well-off individuals. We formally show that this intriguing dilemma is more severe than previously recognised, and we examine how people negotiate such conflicts with a questionnaire-experimental study. Our study shows that both tyrannies are rejected by a majority of the participants, which makes it problematic for them to define consistent distributive preferences on the distribution.