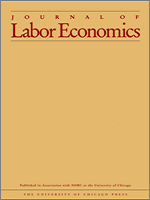 Photo: The University of Chicago Press

In most countries, employers are financially responsible for sick pay during an initial period of a worker’s absence spell, after which the public insurance system covers the bill. Based on an empirical evaluation of a quasi-natural experiment in Norway, where pay liability was removed for pregnancy-related absences, we show that the system of short-term pay liability creates a sick pay trap: firms are discouraged from letting long-term sick workers back into work since they then face the financial risk associated with subsequent relapses. We present evidence indicating that this disincentive effect is both statistically and economically significant