Implications of an Economic Theory of Conflict: Hindu-Muslim Violence in India 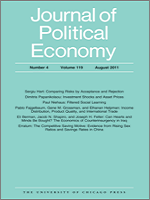 We model inter-group conflict driven by economic changes within groups. We show that if group incomes are low, increasing group incomes raises violence against that group, and lowers violence generated by it. We then apply the model to data on Hindu-Muslim violence in India. Our main result is that an increase in per-capita Muslim expenditures generates a large and significant increase in future religious conflict.  An increase in Hindu expenditures has negative or no effect.  These findings speak to the origins of Hindu-Muslim violence in post-Independence India.