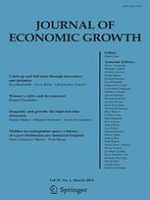 Why has the expansion of women’s economic and political rights coincided with economic development? This paper investigates this question by focusing on a key economic right for women: property rights. The basic hypothesis is that the process of development (i.e., capital accumulation and declining fertility) exacerbated the tension in men’s conflicting interests as husbands versus fathers, ultimately resolving them in favor of the latter. As husbands, men stood to gain from their privileged position in a patriarchal world whereas, as fathers, they were hurt by a system that afforded few rights to their daughters. The model predicts that declining fertility would hasten reform of women’s property rights whereas legal systems that were initially more favorable to women would delay them. The theoretical relationship between capital and the relative attractiveness of reform is non-monotonic but growth inevitably leads to reform. I explore the empirical validity of the theoretical predictions by using cross-state variation in the US in the timing of married women obtaining property and earning rights between 1850 and 1920.