- We can reduce our vulnerability to extreme weather, says Karen O'Brien. She contributed crucial knowledge to the UN’s Intergovernmental Panel on Climate Change, which was awarded the Nobel Peace Prize. 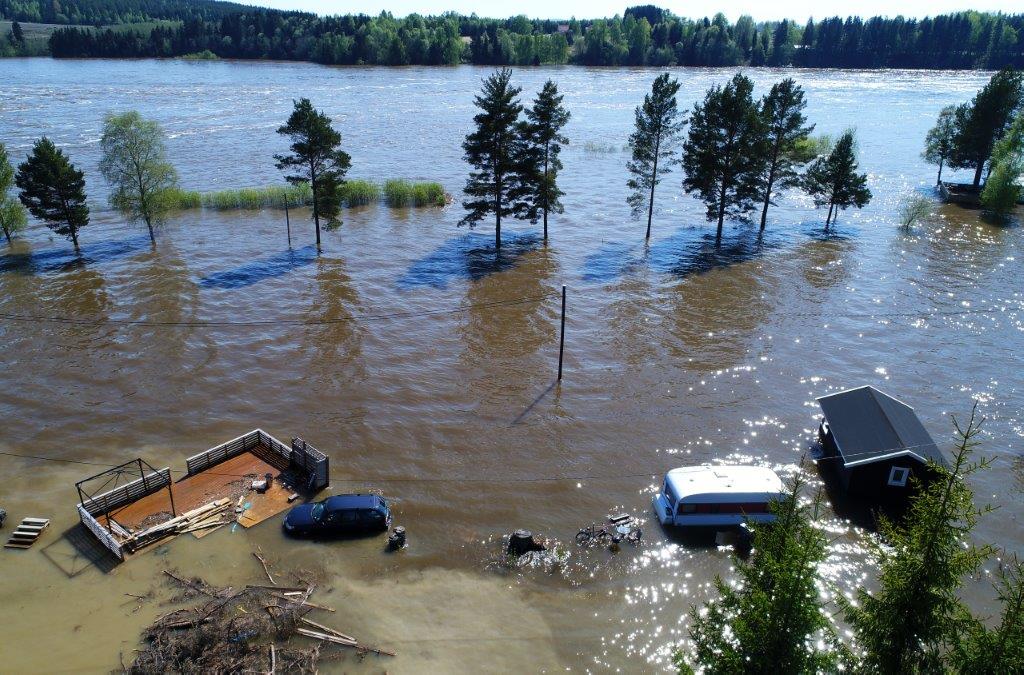 ALSO IN OUR BACKYARD: Floods and hurricanes are not only ocurring far away. Extreme weather also affects the river Glomma in Akershus county. Professor Karen O’Brien has investigated how we can reduce our vulnerability to extreme weather. (Foto: Cornelius Poppe / NTB scanpix)

- The special report that we prepared for the Intergovernmental Panel on Climate Change is unique because it introduced the discussion on major societal changes and a restructuring of the climate debate.

In the past, both scientists and the Climate Panel were cautious about talking about this, but in this report, the researchers are looking forward and discussing what changes are actually required in order to prepare for extreme weather phenomena, says Karen O'Brien, who is a Professor at the Department of Sociology and Human Geography at the University of Oslo.

Supported by the Norwegian authorities

It all started when the Norwegian Ministry of Foreign Affairs’ Prevention Action Section contacted the UN’s Climate Panel in 2008, enquiring about a special report on extreme weather. The world's climate was rapidly changing, several climate catastrophes were anticipated and the Section saw the need for more knowledge about prevention, resistance capabilities and adaptation opportunities.

The UN’s Climate Panel was initially sceptical about commencing work on such a special report, since it thought that there was not enough research available on this subject.

The Norwegians decided to reinforce their application with a literature review of available research in this field. The Norwegian Ministry of Foreign Affairs contacted Karen O’Brien and her research group, and over a period of four weeks during the summer of 2008 a comprehensive report was drawn up containing contributions from a large international network of researchers.

At the time Professor O'Brien was the Chairman of the Global Environmental Change and Human Security (GECHS) research group, which had an international project office at the Department of Sociology and Human Geography (ISS) at the University of Oslo.

- When the research team I was leading started digging, we discovered that there was a considerable amount of social science research available on how states, communities and individuals all over the world are working in order to prevent and adapt to climate disasters. This body of research was virtually unknown by politicians and natural scientists at the time, says Karen O’Brien.

The research results have been published internationally and have reached a large audience.

During the spring of 2009, the research team commenced the painstaking work of systematising and reviewing all the available knowledge about the links between climate change and extreme weather, adaptation and contingencies. The special report was entitled "Managing the Risks of Extreme Events and Disasters to Advance Climate Change Adaptation (SREX)", and it was launched in Oslo in 2012. Ever since then the report has had a major impact on our understanding of the links between climate change, extreme events and risks. The research results have been published internationally and have reached a large audience.

- This special report is unique because it brings together knowledge from both climate scientists and those involved with disaster risk reduction, two groups of specialists who have not worked together in the past, says Professor O'Brien.

The special report was innovative in respect of both science and politics because it was based on interdisciplinary cooperation between natural and social scientists, and because it was written by a multidisciplinary team which included experts from the UNISDR, the WHO and the Red Cross. These institutions later included the various research findings in their policies and practices.

The report shows that there is a clear correlation between adaptations to climate change, human safety and reducing disaster risks. It also focuses on how our capacity to address climate threats can be strengthened at the local, national and international levels.

Not just an environmental issue

The research that was collected and assembled clearly shows that climate change cannot be understood as an isolated environmental issue that can only be solved by means of technology, but that societal conditions also have a great impact on risks and vulnerabilities. Professor O’Brien says that culture, values and world views affect both how we understand risks and our reactions to climate change. The special report refers to strategies that are designed to reduce risks and vulnerabilities.

- Climate researchers are now getting straight to the point, more so than previously

As a researcher, Professor O'Brien is keen to reduce the differences between disciplines, and between academics and practitioners. She says that the work undertaken on the special report made it easier to cooperate with other disciplines in subsequent reports since contact had already been established between the different communities.

Professor O’Brien thinks that researchers are often cautious about speaking out too clearly about the relationship between extreme weather and climate change, but she is now seeing changes, five years after the report was released.

- Climate researchers are now getting straight to the point, more so than previously. They are speaking out about anthropogenic climate change, and about what it could lead to if we fail to reduce greenhouse gas emissions and climate vulnerability, she explains.

She says that it is no coincidence that some communities are vulnerable. It is all about how we organise our communities, access to land, food systems, how our houses are built and where people live.

- We must constantly ask ourselves if we have systems and institutions that work, even here in Norway.

She says that we need to mobilise and build up communities and systems which could reduce our vulnerability, and refers to the homes which were washed away by the floods in Gudbrandsdalen and in Central America.

- We are all affected by this, but in different ways. We must constantly ask ourselves if we have systems and institutions that work, even here in Norway. We have access to a wide range of resources, but are we able to mobilise them when comes down to it?

Professor O’Brien thinks that we can do a lot – both individually and politically:

- We are all part of this climate system. The UN’s Climate Panel has repeatedly shown that humans are affecting the climate and that we need to make rapid adjustments. The special report shows that there is a lot we can do now in order to reduce disaster risks.

O’Brien points out that this is where the social sciences are particularly important. As individuals, we can influence the systems around us, and social scientists are trained to see the correlations between societies, politics, technology and individuals' lives.

- This needs to be included at an early stage in schools so that young people understand the power of their influence.

The work conducted on the report about extreme weather was not without consequences for the researcher herself. Special reports like this have a deadline of two years, rather than four, which is the most common deadline for main reports being submitted to the UN’s Climate Panel. The researchers also faced practical challenges involving colleagues working on several continents and in different disciplines.

There were also physical consequences. Professor O'Brien cannot remember a single weekend without deadlines, and she worked non-stop for two days at a time on several occasions. Each researcher was responsible for reading, assessing and commenting on all the relevant scientific articles on specific topics. These comments then had to be read and assessed by other researchers. This amounted to a flood of professional comments that had to be addressed, around the clock.

- However, I am almost moved to tears when I think about all those dedicated researchers, this community of enthusiastic professionals who worked day and night on a subject that they are passionate about. Even when their babies were born and they were about to get married, they made sure that their reports were completed. Because this was something which could not wait.

- A world in which we fail to adapt to is not a place we would want to live in," she says, referring to a loss of biodiversity and escalating differences between people as examples of a future scenario.

Karen O'Brien is from the United States, and when she wrote this article, her mother was living in Florida. When Hurricane Irma raged above her mother's roof in September 2017, she rang her several times a day and encouraged her to be careful. Fortunately, everything went well - her mother did not lose any power and she was safe.

- But it shows that no-one can escape, that we are all affected. The question is: do we have to wait until our grandmothers are floating down flooded rivers before we understand that this applies to all of us? concludes Karen O'Brien.

Social scientists at the University of Oslo are hard at work every day to understand how the world works. Their knowledge lays the foundation for new government policy, greater efficiencies for society, improved public services and a more environmentally sustainable future. This page provides just a few examples of how social science is being applied for the common good. Images in header from Colourbox og Unsplash.