Not so Low Fertility in Norway—A Result of Affluence, Liberal Values, Gender-Equality Ideals, and the Welfare State 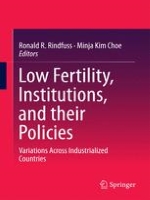 In Norway, the total fertility rate over the years 2000–2013 averaged 1.86 births per woman. Women born in 1968, which is the youngest cohort that has completed their reproductive period, had 2.03 children on average. Only 13 % of that cohort remained childless, and 83 % of those who became parents had at least two children. This chapter discusses possible reasons for this high fertility compared to that of most other rich countries. Norway’s advantaged economic position is probably one ingredient. There is little income insecurity for individual families, and the state can afford to be generous with parents, not least with respect to daycare and parental leave. The willingness to prioritize such spending does not reflect concern about below-replacement fertility, but rather the social-liberal or social-democratic ideas about public responsibility for individual well-being that are strongly rooted in Nordic societies, accompanied by widely accepted ideals of gender equality. It is possible that these ideals also affect fertility positively by promoting men’s involvement with children and in housework. Another explanation for Norway’s high fertility may be that, although the retreat from marriage has been as least as pronounced as in most other rich countries, this has been counteracted by widespread cohabitation and a large number of births among cohabiting couples—probably reflecting in part their trust in the welfare state and liberal values. The chapter ends with a discussion of whether lower fertility would, in fact, be a problem for Norway.