From classes to copulas: wages, capital, and top incomes 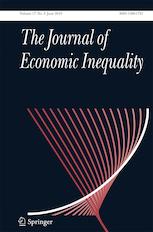 Public debates about the rise in top income shares often focus on the growing dispersion in earnings, and the soaring pay for top executives and financial-sector employees. But can the change in the marginal distribution of earnings on its own explain the rise in top income shares? Are top executives replacing capital owners in the group of top-income earners, or are we rather witnessing a fusion of top capital and top earnings? This paper proposes an extension of the copula framework and uses it for exploring the changing composition of top incomes. It illustrates that changes in top income shares can easily be decomposed into respective changes in the marginal distributions of labour and capital income and the changing association between the two types of income. An application using tax record data from Norway shows that the association between top labour and capital incomes grew stronger between 1995 and 2005 in the top half of the wage and capital income distribution, though it declined for the top 1% of capital income receivers. A gender decomposition demonstrates that the association of wage and capital incomes at the top is particularly striking for men, whilst women are largely under-represented in the top halves of the two marginal distributions.