Framing in a Threshold Public Goods Experiment with Heterogeneous Endowments 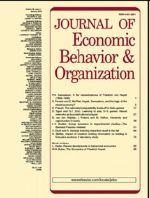 In cooperative endeavors among economically heterogeneous parties, the contribution decisions can often be framed in different ways. But do such framing differences affect behavior? We report the results of a laboratory experiment on threshold public goods with heterogeneous endowments and different frames. Four treatments frame two variables, each in one of two ways: the contribution metric is expressed either in absolute terms or relative to endowments, and the contribution choice is framed as either keeping or contributing some of one’s endowment. Subjects can exchange proposals and counterproposals. Our results reveal a broad consensus that high endowed subjects contribute more in absolute terms than the low endowed, which we trace to subjects’ reported distributive preferences. Both high and low endowed subjects contribute about two-thirds of their endowments in all treatments – save when the metric is framed as “contributing” in “absolute” terms: then the low endowed contribute significantly more, around 80%. This last result suggests the possibility that the most frequently used frame in public good experiments induces higher contributions among the less affluent than economically equivalent alternate frames.