UiO Faculty of Social Sciences Department of Economics
Main navigation
Back to uio.no
Sub navigation Menu
Research > Publications > Articles > 2017 > On the founding of the Econometric Society

On the founding of the Econometric Society 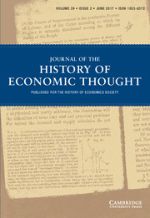 Journal of the History of Economic Thought

The Econometric Society was founded in December 1930. Invitations for a meeting to establish “an international society for the advancement of economic theory in its relation to statistics and mathematics” had been distributed by Irving Fisher, Ragnar Frisch, and Charles F. Roos, together with a draft constitution. In June 1930, the same instigators had sent a form letter to a list of thirty-one scholars from ten different countries to solicit advice on establishing an international association “to help in gradually converting economics into a genuine and recognized science.” The hitherto unpublished responses are set out in the paper. The impact of the solicited advice, not least from François Divisia and Joseph Schumpeter, on the formation of the Econometric Society is discussed in some detail.