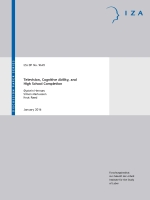 Link to the publication.

We exploit supply-driven heterogeneity in the expansion of cable television across Norwegian municipalities to identify developmental effects of commercial television exposure during childhood. We find that higher exposure to commercial television reduces cognitive ability and high school graduation rates for young men. The effects are largest for exposure during pre-school and elementary school age. We find no effect on high school completion for women, suggesting availability of non-educational media content as a factor in the widening educational gender gap. Based on time-use data, we show that a possible explanation is that television-watching crowds out reading more for boys than girls.