Keeping others in our mind or in our heart? Distribution games under cognitive load 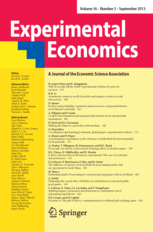 It has recently been argued that giving is spontaneous while greed is calculated (Rand et al., in Nature 489:427–430, 2012). If greed is calculated we would expect that cognitive load, which is assumed to reduce the influence of cognitive processes, should affect greed. In this paper we study both charitable giving and the behavior of dictators under high and low cognitive load to test if greed is affected by the load. This is tested in three different dictator game experiments. In the dictator games we use both a give frame, where the dictators are given an amount that they may share with a partner, and a take frame, where dictators may take from an amount initially allocated to the partner. The results from all three experiments show that the behavioral effect in terms of allocated money of the induced load is small if at all existent. At the same time, follow-up questions indicate that the subjects’ decisions are more impulsive and less driven by their thoughts under cognitive load.