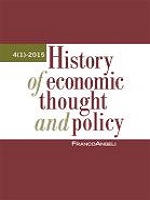 Professor of Economics at the University of Chicago, Henry Schultz spent a sabbatical year in Europe in 1933/34 working on his forthcoming monograph The Theory and Measurement of Demand (Schultz 1938). During the year, he found time to travel to 6-7 countries, meeting economists and other scholars. This article describes and comments on his seven weeks’ visit to Italy in March-April 1934. The glimpses of Henry Schultz in Italy are provided by his own brief diary notes. He met with virtually all the leading econometricians of the time, and was interested in the stand taken by Italian economists on Mussolini’s corporative state, as well as in the situation of the Jews under Fascism.