UiO Faculty of Social Sciences Department of Economics
Main navigation
Back to uio.no
Sub navigation Menu
Research > Publications > Articles > 2010 > How different are hospitals' responses to a financial reform? The impact on efficiency of activity-based financing

How different are hospitals' responses to a financial reform? The impact on efficiency of activity-based financing 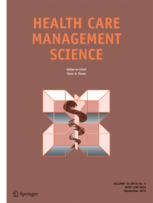 For policy-makers the heterogeneity of hospital response to reforms is of crucial concern. Even though a reform may entail a positive effect on average efficiency, policy-makers will consider the reform as less attractive if the variation in hospital efficiency increases. The reason is that increased variance of efficiency across hospitals is likely to increase the impact of geography on access to hospital services. This paper examines the heterogeneity with respect to the impact of a financial reform—Activity Based Financing (ABF)—on hospital efficiency in Norway. From a theoretical model we find an ambiguous effect of hospital heterogeneity on the effect of ABF on efficiency. The data set is from a contiguous 10-year panel of 47 hospitals covering both pre-ABF years and years after its imposition. Substantial heterogeneity in the responses, as measured by both estimated and predicted coefficients, is found. We did not find any significant correlation between pre-ABF measures of efficiency and the effect of ABF on efficiency. We did however find a strongly significant correlation between the effect of ABF and post-ABF efficiency. Thus, the analysis confirms the impression that, whereas pre-ABF efficiency did not play any role in how hospitals responded to ABF, those responding generally ended up as better-performing hospitals. Hence, for the type of reform studied in this article we find that policy-makers do not need to worry about the impact of location on patients’ access to hospital services.