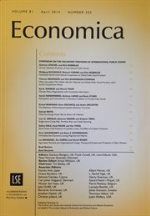 Photo: Economica, The London School of Economics and Political Science

Link to the article

Addressing extensive labour supply responses, the literature has established a case for larger transfers to the working poor than to even poorer non-working people. This paper casts new light on this result. I argue that the result hinges crucially on the labour supply responses of people in income brackets above that of the working poor. Then, distinguishing between more and less poor working people, I show that if a single working type faces a negative tax, it is the poorer one who does. Finally, I endogenize wages and show that key conditions will be of the same form as before.