Heterogeneity of the Carnegie Effect 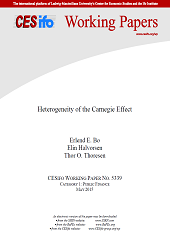 The Carnegie effect (Holtz-Eakin, Joualfaian and Rosen, 1993) refers to the idea that inherited wealth harms recipients’ work efforts, and possesses a key role in the discussion of taxation of intergenerational transfers. However, Carnegie effect estimates are few, reflecting that such effects are hard to trace in data. Most previous studies have relied on data from limited size sample surveys. Here we use information from a rich administrative data set (for the whole Norwegian population), which makes it possible to undertake a detailed examination of the Carnegie effect, including how it varies across groups of recipients. We find that Carnegie effects differ according to the size of the transfer, the age of the recipients, the recipients’ eligibility to other transfer programmes, and the existence of new heirs (children) in the family chain.